Does this apology make by BUT look big? 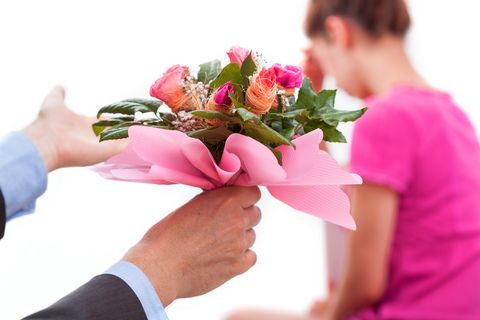 I saw an ad for a florist recently that asked 'Just how sorry are you?' showing a progression of bouquets getting larger (and more expensive) in accordance with the severity of the 'crime'. And while I would never want to discourage anyone from buying a lovely bunch of flowers for someone special, when it comes to apologies – it just isn't that simple.

There are so many ways for an apology to miss the mark when you don't know what you're doing. It's pretty easy to even make things worse!!

When my kiddo was little he accidentally hurt his buddy in a bout of over-zealous roughhousing. After I asked him to go over and tell his little mate how sorry he was, he dutifully walked up to the crying little boy and announced 'how sorry you are'. I have to tell you this did not make anything better.

In our close relationships, the ante is upped to the point that sometimes those botched apologies can create a rift that stops us feeling close and connected in a really significant way.

Let's take one of the common ones: I like to call it the BIG BUT apology. It goes something like:

Ouch! An attack as well as a defense. When we read the subtext of this apology, we hear:

It's not an apology - it's a defense. My feelings have not been understood or validated, they have been dismissed. Underneath, what I hear is – 'your feelings don't matter. Maybe even YOU don't matter. This is about ME'. And on top of that, there's a kind of sting that seems to imply it's somehow all my fault. Picture a big stone wall going up and then fiery arrows flying over the top.

It just doesn't tend to resolve the situation.

The thing is, though, most often defensiveness is based on a HUGE misunderstanding. There's a whole lot going on behind the scenes. Defensiveness tends to be driven by one of two things:

The first is a sincere and yet horrifically bad attempt to make our partner feel better. Because we love them! If they could only understand that we didn't mean to embarrass them in front of their boss, or forget to pick them up on a rainy night, or tape over the wedding video with a football game, or... (fill in the blank) then they would understand and not be so hurt. If only we could convince them that they were overreacting, then they wouldn't be so upset. So we try and try to tell them they are being too sensitive or they are misunderstanding and they need to just listen to reason. But that just seems to make them madder or more and more distant. So we try harder and around we go. Go figure.

The other really common reason for defensiveness in our close relationships is how bad it feels to have disappointed or hurt the person who matters most. For some of us – for reasons that make so much sense – even the tiniest hint of our partner's disappointment or disapproval can graze an acutely sensitive trigger and send us into a primal panic. The defensive reflex kicks in so automatically not because we don't care, but because we do. Even a whisper of our partner's disapproval will send us into an automatic attempt to talk them out of it. Or dismiss it. Or mimimize it.

BUT – and now here comes MY big BUT: An apology has to cover a number of bases for it to do the trick. For real healing to occur, our partner has to show us that they really do get why we are upset and that they really do care and to own their part in that and to show how they'd do it differently next time and then ask for your forgiveness. But once you have forgiven them it is finally resolved. Done. Over. The fat lady has sung.

That might sound like a lot of different bits, but break them down and you have the anatomy of an apology - and you can put that in the bank.

It is so common for one partner to moan 'OMG I've said I am sorry a million times and you just won't let it go! Am I going to be punished forever?'

I would bet money that once the apology is done right - it is over once and for all. Finished. Healed. Now isn't that worth finding out more about?

In her book "Hold Me Tight: Seven Conversations for a Lifetime of Love", Dr Sue Johnson devotes a chapter to this very thing. She even talks you through doing it in the privacy of your own relationship, so you can D.I.Y.

Phone: 0466 797 173
Email: This email address is being protected from spambots. You need JavaScript enabled to view it.